Home > Promises and Possibilities: Getting To Know The ABLE Act

The National Disability Institute estimates that there are 58 million individuals with disabilities in the United States.

On December 19, 2014, those lives were forever changed when President Obama signed the Achieving a Better Life Experience (ABLE) Act into law – eight years after it was first introduced in 2006. In simplest terms, the ABLE Act exists to provide a better economic future for people with disabilities.

This unprecedented legislation was spearheaded by Sara Wolff, a 31-year-old law clerk from Pennsylvania living with Down syndrome. Her petition lobbying for it’s passing garnered 270,000 supporters over the course of the year, and there’s no doubt that her voice was heard, as the Senate voted a resounding 76-16. 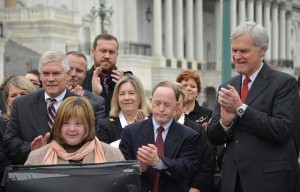 Before the ABLE Act was passed, individuals and families would lose federal benefits because their savings exceeded certain limits.

What is the ABLE Act?

A first in public policy, the ABLE Act acknowledges the substantial costs of living with a disability. Its overall purpose is to assist disabled individuals by providing the necessary resources for maintaining health, promoting independence, and increasing quality of life.

The ABLE Act allows those with disabilities to have a tax-exempt savings account to help them and their families pay for a variety of expenses:

These accounts can be opened and maintained without the fear of losing eligibility for Medicaid, Supplemental Security Income (SSI), and other important federal benefits for people with disabilities.

A qualifying beneficiary may only have one ABLE account at a time, but anyone can contribute to it, including family and friends. However, the current gift-tax limits prevent more than $14,000 in annual deposits.

What’s even better is that this will have no impact on Medicaid coverage. Those who receive it will continue to do so, regardless of how much money is in their ABLE account. What will be affected is Supplemental Security Income (SSI). Eligibility will be unchanged, but those benefits will be suspended if the ABLE account exceeds $100,000. However, when the owner dies, there is a payback provision to the Medicaid program to the extent that Medicaid had paid for services and coverage for the owner.

Who is eligible for the ABLE Act?

An individual will automatically qualify for an ABLE account if they are, or became, disabled before the age of 26. That is assuming they are already eligible or receiving benefits under the Supplemental Security Income (SSI) program or under the Social Security disability, retirement, and survivors program.

Since the act was passed at the end of 2014, there’s a strong possibility that, at least in some states, ABLE accounts will be available to those who qualify before the end of 2015. Any delays would be due to the amount of time each state takes to set regulations so that financial institutions can make these types of accounts available.

The Secretary of the Treasury must put federal regulations in place within six months of the ABLE Act passing, meaning a June 2015 deadline. Then the ball is placed in the states’ court, who must decide 1) to actually offer the program and 2) if it will be run by the state or an outside entity, like a financial services firm.

Currently, Texas has not made any proactive steps in passing the required enabling legislation to make this a reality for Texas residents. Families who are interested in establishing ABLE accounts should seek legal counsel in the state where their loved one resides.

Sara Weir, president of the National Down Syndrome Society, led efforts to lobby for the law but believes it will be 2017 before ABLE accounts will be available. Others, like Sen. Richard Burr (R-NC), a chief sponsor of the ABLE Act, are much more confident. “We can’t mandate that a state will create a 529, but given the lobby that we’ve seen, I think by the end of next year, I think we’ll see this in every state.”

How is this different from a special needs or supplemental needs trust?

ABLE accounts give the beneficiary and their families more choice and control – not to mention the cost of setting one up will be significantly less than a trust. Holders of an ABLE account can control its funds at will, making it much more accessible than other types of benefits. This isn’t to say an ABLE account should replace any existing or future trusts, but rather adds another viable option for investing money towards long-term care.

Achieving a better life experience no longer represents a unanimous goal for people with disabilities. It represents a means to finally achieve that goal.

If you have any questions or would like more information about the ABLE Act, don’t hesitate to contact the Law Office of Christina Lesher at (713) 529-5900 today.

Contact Christina Lesher Today
What Clients are Saying
The best decision we ever made was scheduling an appointment with Christina Lesher
- Malcom S.
During my first visit, Christina explained my different options. I went home that night and got the first good night sleep I had in a couple of years.
- Bob H.
I would highly recommend Christina Lesher, as she is a most knowledgeable elder law expert.
- Robert W.
Every step of the way Christina made me feel like I was her only client.
- Sandy K.
Christina Lesher gave me the tools that I needed to comfortably enter my father into a retirement home. Her staff helped to make the transition easy.
- Valerie B.
Christina was the glue that kept all of us together and kept me focused on what had to be accomplished I could not have done it without her.
- Marcy S.

Thank you so much for visiting my website. Don’t worry- we are still booking new client appointments and assisting current clients.